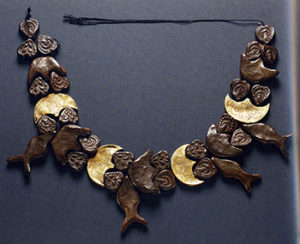 There’s a type of adornment in Northern Africa that is well known in all Maghreb: the scented beads necklace, called “Skhab”, which has a symbolic and ritual meaning, due to the perfume it exhaled. It is mainly used in Algeria and Tunisia, while in Morrocco, the used of cloves for the same purposes is more extended.

The origin of these necklaces is not clear. Some researchers claim it to be of Berber origin (P. Eudel), while others think that they might have come with the Arab invasion.

The used of these perfumed necklaces is widespread in rural Algeria and Tunisia, but it’s also well known in big cities, where women can buy them from jewelry shops, strung with gold beads and pendants. In small villages, women prepare the paste themselves. The ingredients can be different from one region to the other, but the principle is the same: the making of a very strong perfumed formable paste from which small beads are modeled in different shapes, (pyramids, cylinders, triangles) and strung later into a necklace.

How are the skhab necklaces made?

The mash is made basically with cloves, saffron, nard and patchouli, mixed with some other liquid ingredients like musc, rose water and benzoin. It can also be mixed with dates or egg white (in Mzab, Argelia) or butter (Djebel Armour, Argelia). 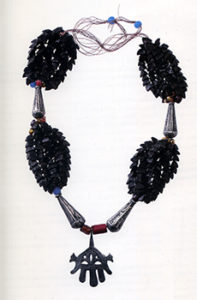 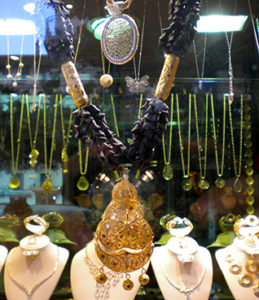 In big cities, the scented paste is usually blended with grey amber (a concretion on the intestines of the sperm-whale). The mixture is left to dry for 3 days in a shadow place. Then, women shape the beads and make the hole to string them.  The scented beads are strung in different lines making groups. There are 2 or 4 series of these groups on each necklace. On rural villages they can be mixed with red coral beads and a central pendant, usually a silver Hamsa, together with other silver or glass beads. After the necklace is completed, the beads will retain the strong and penetrant smell for years.  In big cities, like Constantine, Alger or Tunis, the beads are strung with gold filigree pendants and beads, making a big necklace. Nowadays They can be seen and purchased at jewellery shops in these cities.

But this scented necklace, together with the Moroccan cloves necklaces, have also a prophylactic meaning. It can protect the wearer against illness and the evil eye, as they are believed to keep the “djinns” away.